In April 2020, we received a letter from the Granddaughter of Hugh Farquhar who was sorting out some family papers at her home in Norfolk when she came across Hugh’s early correspondence relating to the founding of Ladbrook Park Golf Club.

She very kindly included the correspondence all in remarkably good condition in her letter.

It is reproduced below in memory of Hugh Farquhar a founder and life Member of Ladbrook Park.

Tom Williamson was an expert green keeper and professional at Notts GC report and was asked by Robin Hood Golf Club to carry out an inspection of Ladbrook Park.

Tom pioneered the idea of modelling greens in plasticine, a practice only recently outmoded by computer assisted design. Williamson was responsible for virtually every golf course opened within a fifty miles radius of Nottingham, around sixty in number. Many of these have stood the test of time without major alterations.

Apparently, the family had a nine-hole course at the back of the Ladbrook Hall with a small clubhouse in the yard. This course was probably laid out by the Bowen’s gardener, Bob Bradburn, who came to the parish with his father and the Rev. Lord Moncrieff, the vicar of St Mary Magdalene.

Setting out from Ladbrook Hall, we know the course started on the 17th to a green in front of the current bunkers before going across to what is now the 12th for the 2nd hole.

Robin Hood GC was at this time was adjacent to the Hall Green Racecourse in the vicinity of Fox Hollies Road, Hall Green. By this time, however, problems began to arise. Birmingham was expanding and urban sprawl threatened the peaceful area with its “bracing air” as the Birmingham Gazette’s correspondent described it.

Appointing a sub-committee to: 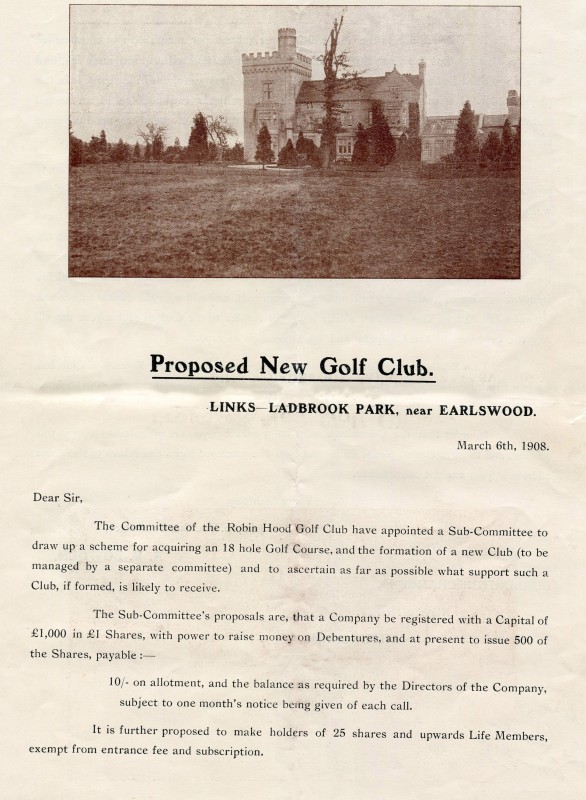 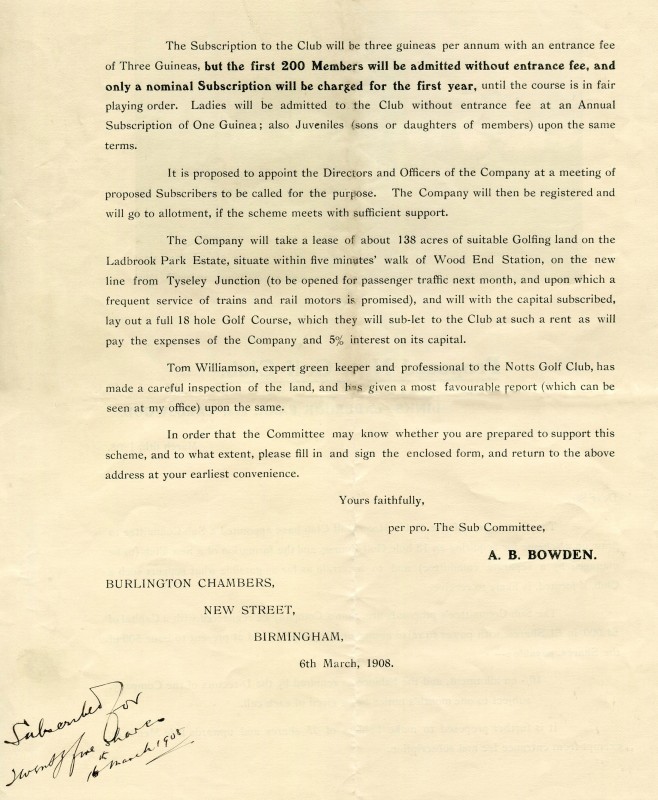 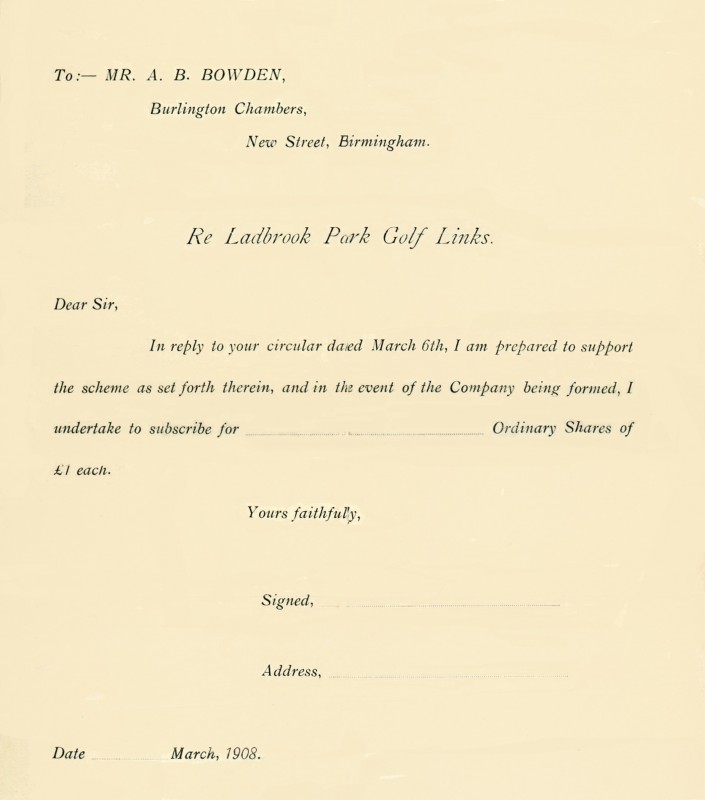 The letter was from A.B. Bowden Hon Sec (Robin Hood GC) who later became a Director of the Birmingham Golf Club.

To decide course of action for the ‘Ladbrook Park Scheme’ 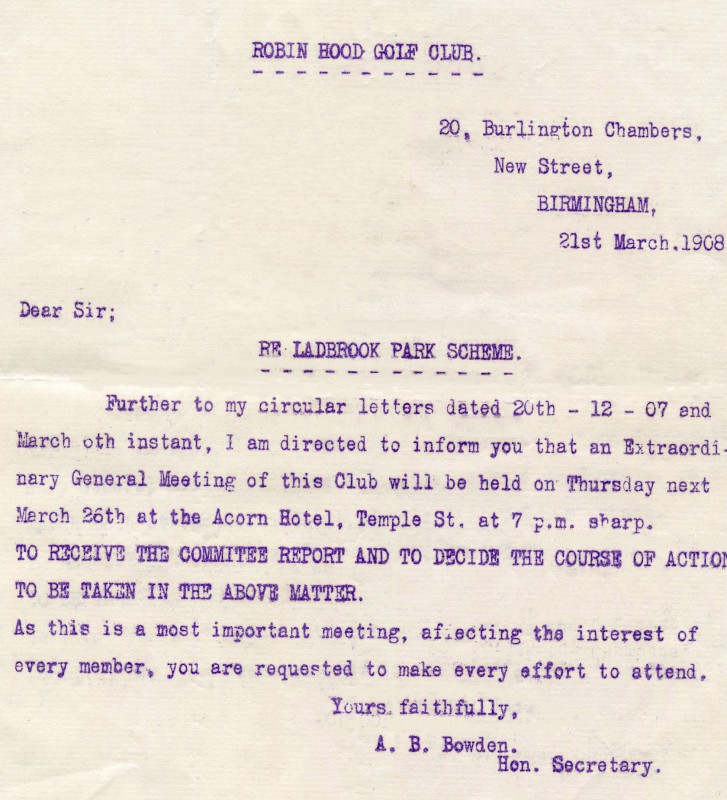 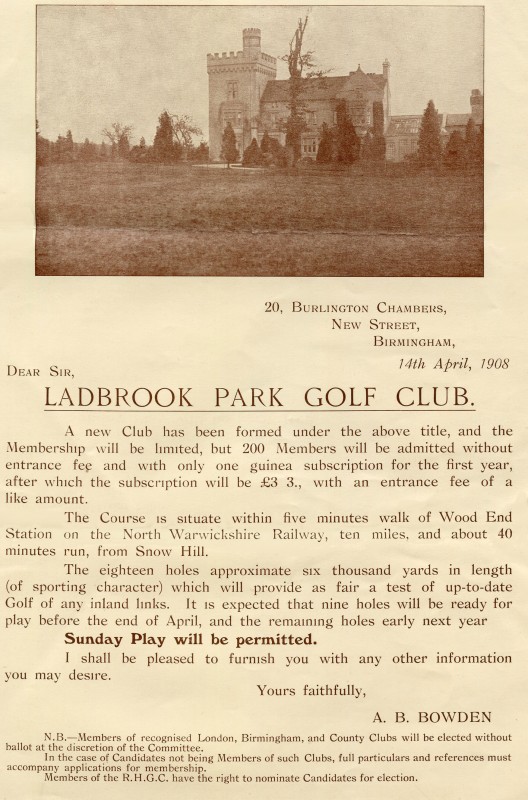 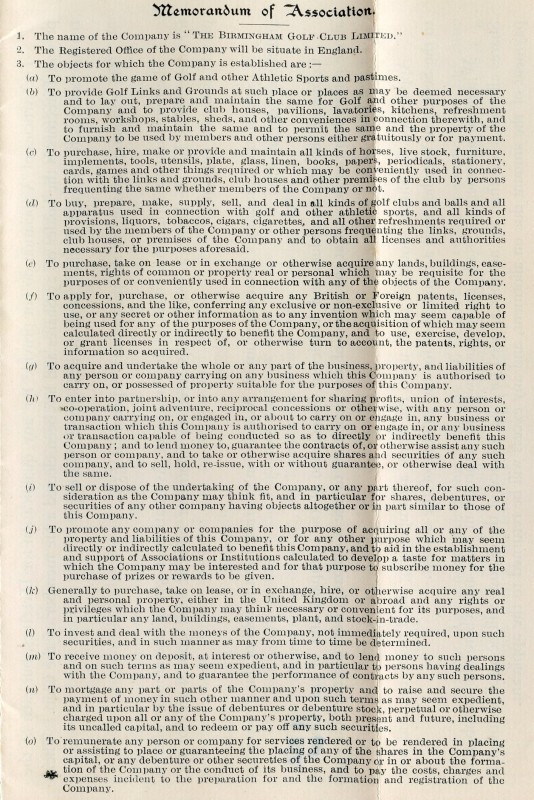 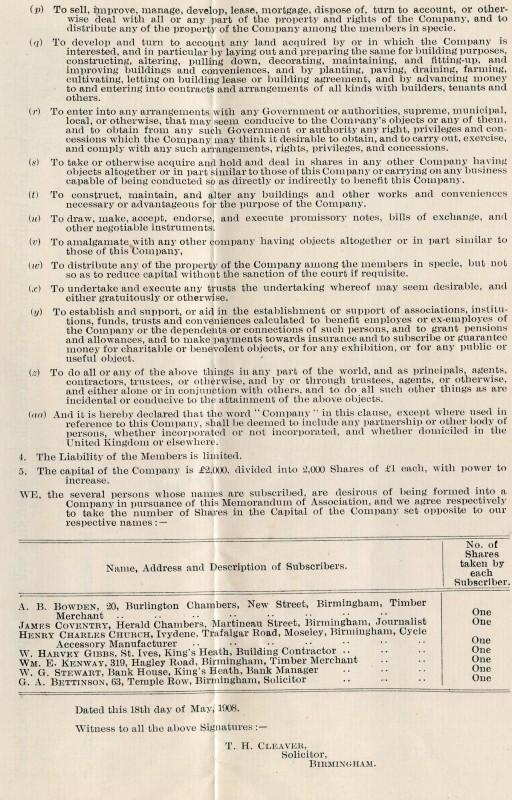 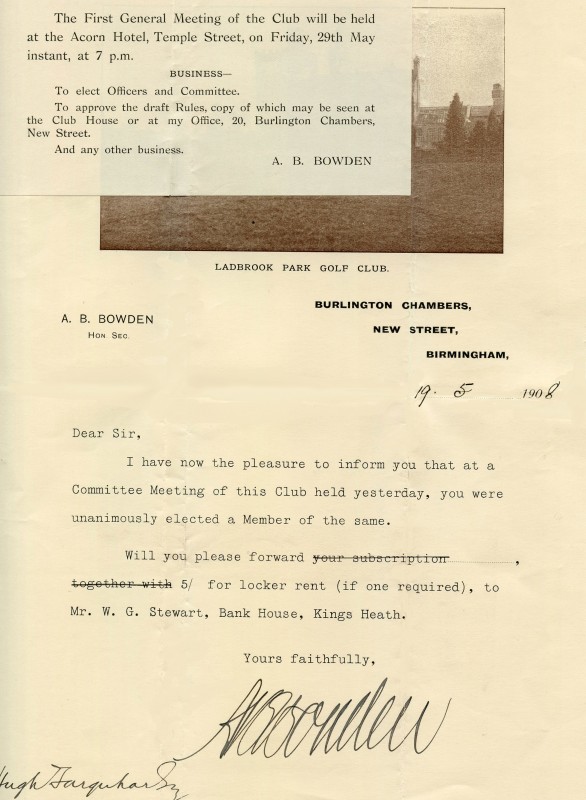 Invited Tom Williamson to lay out an eighteen-hole golf course 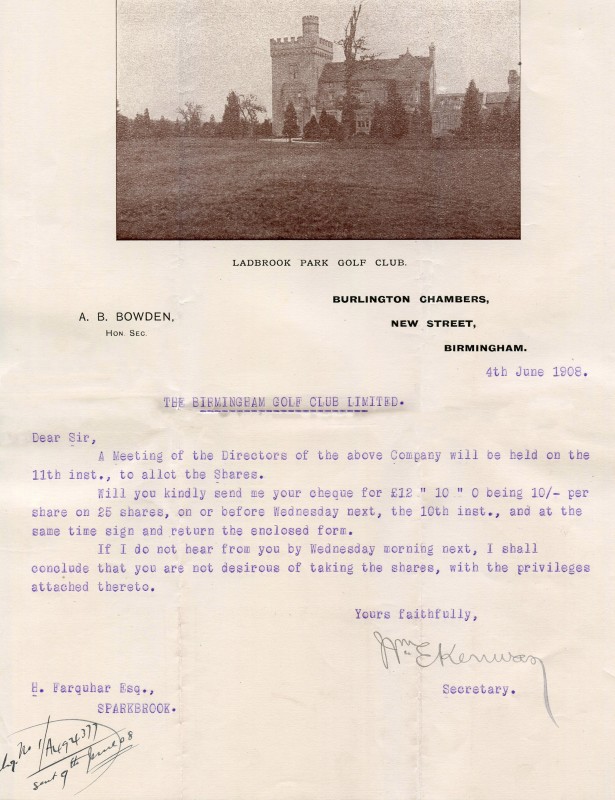 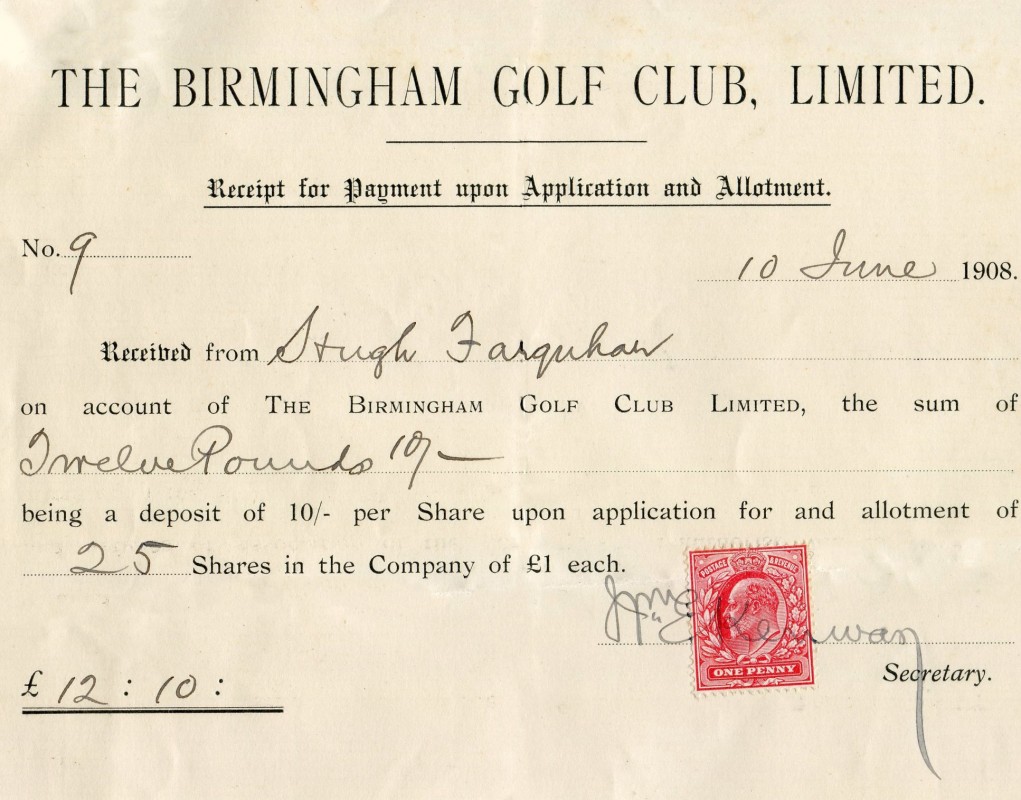 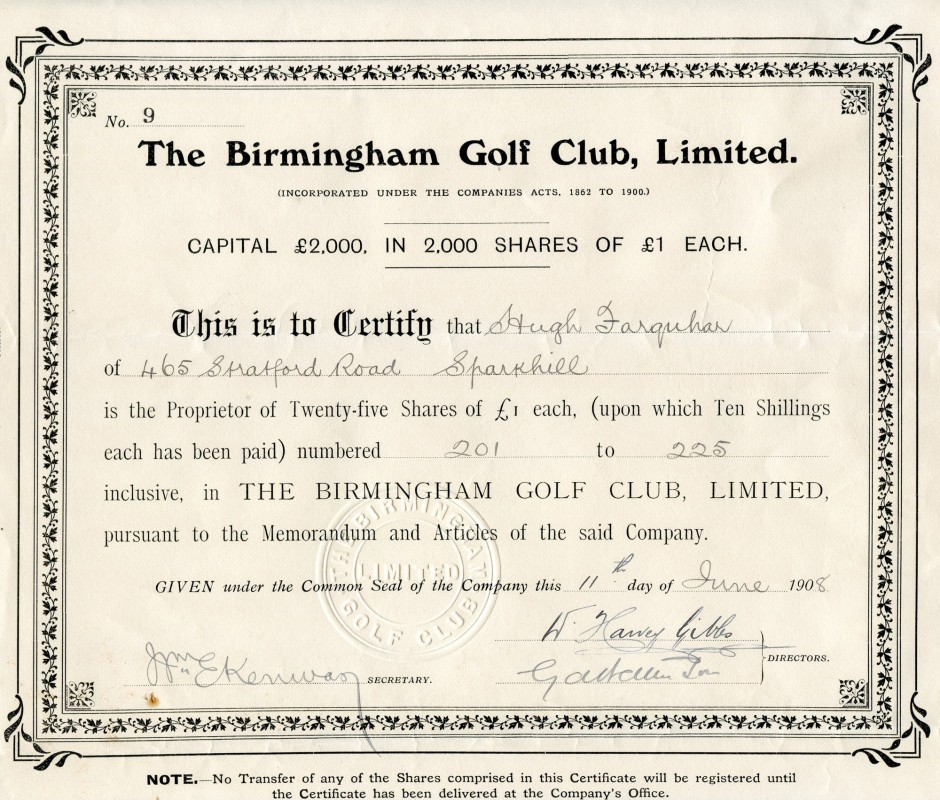 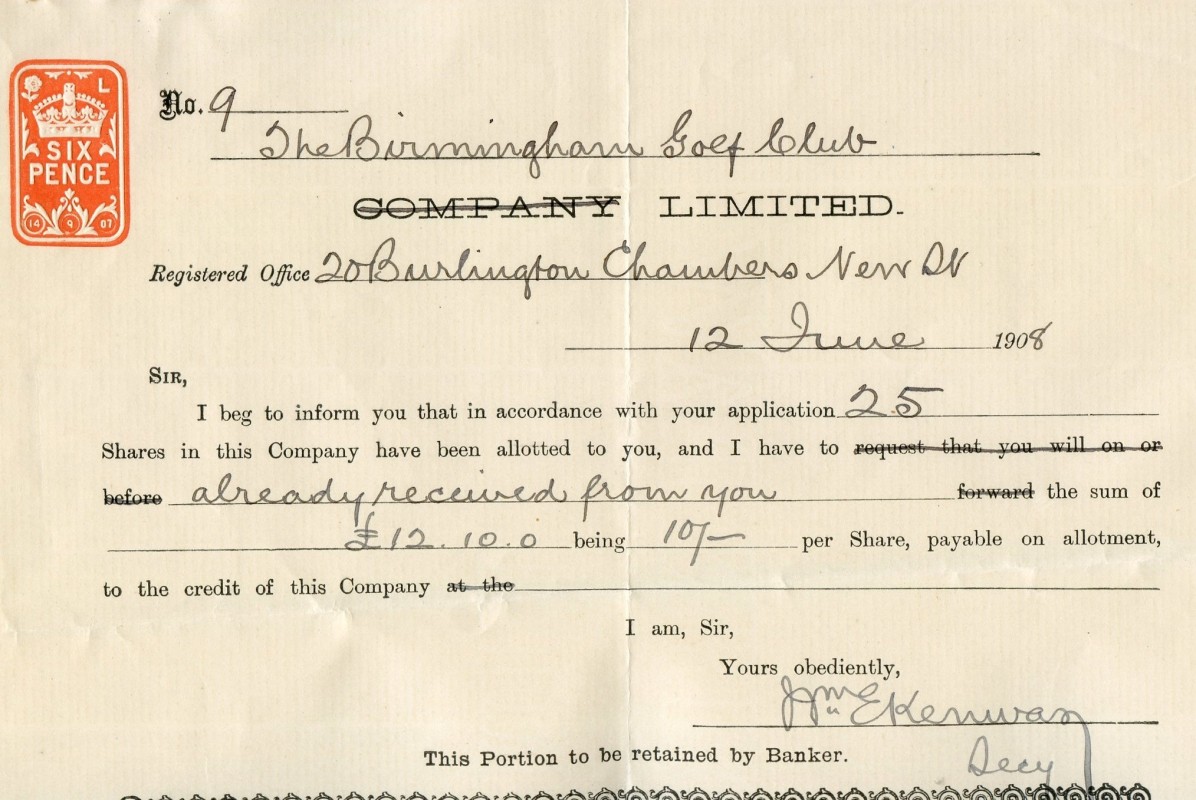 A formidable throng gathered on the platform at Snow Hill for the journey to Wood End.

Mr Bowden, the club’s secretary had arranged for a Sunday service with the railway company. It was a common practice then for golf clubs and railways companies to come to agreements on services and concessionary fares. 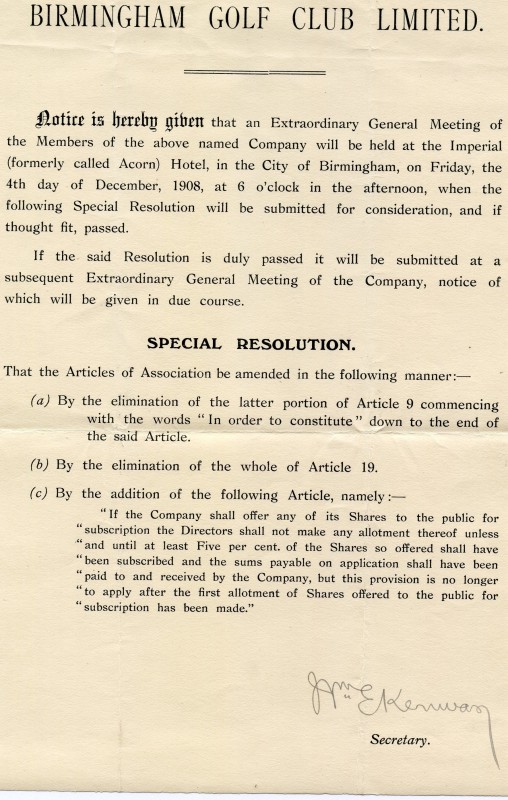 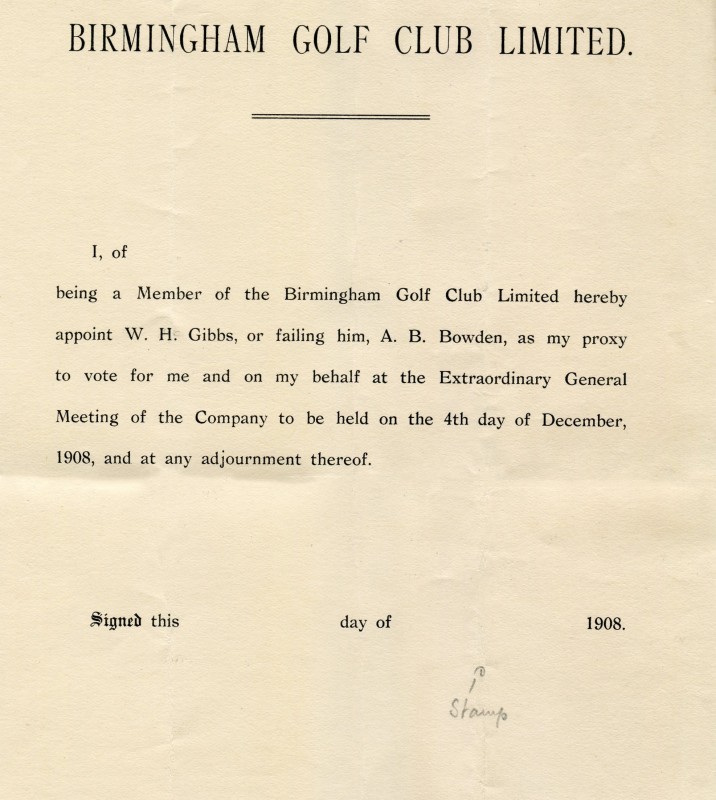 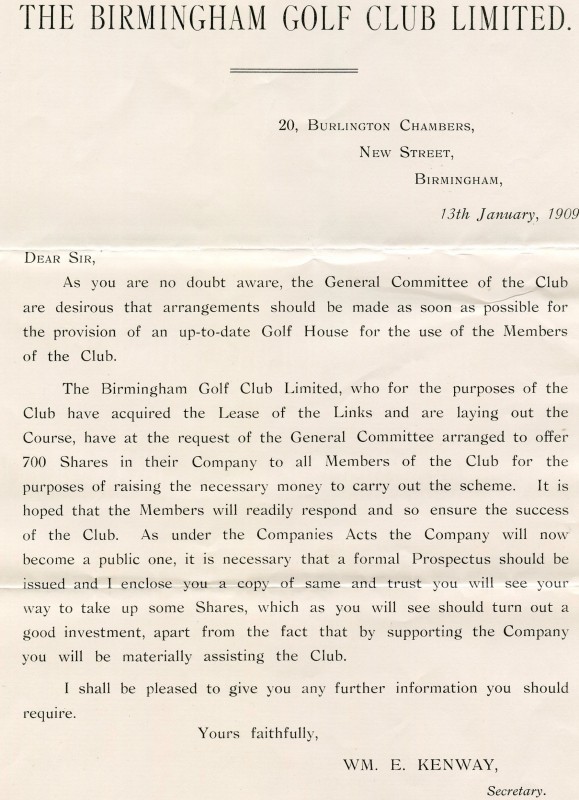 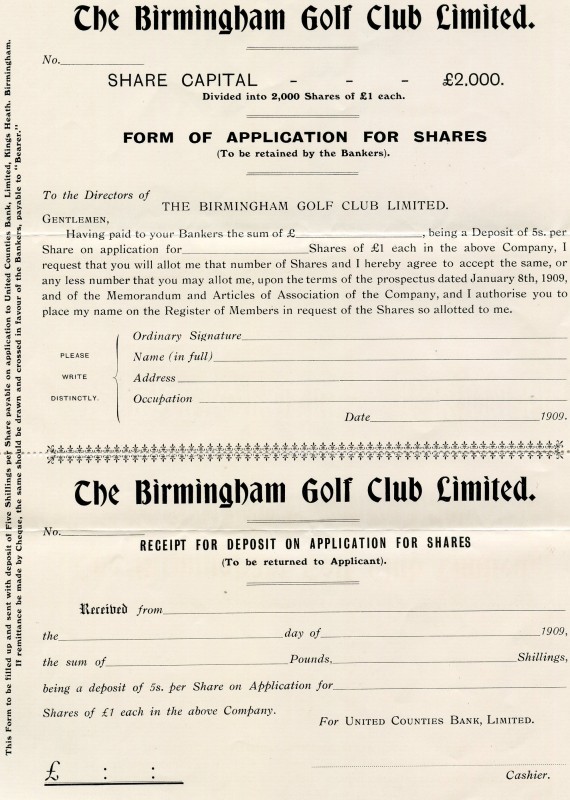 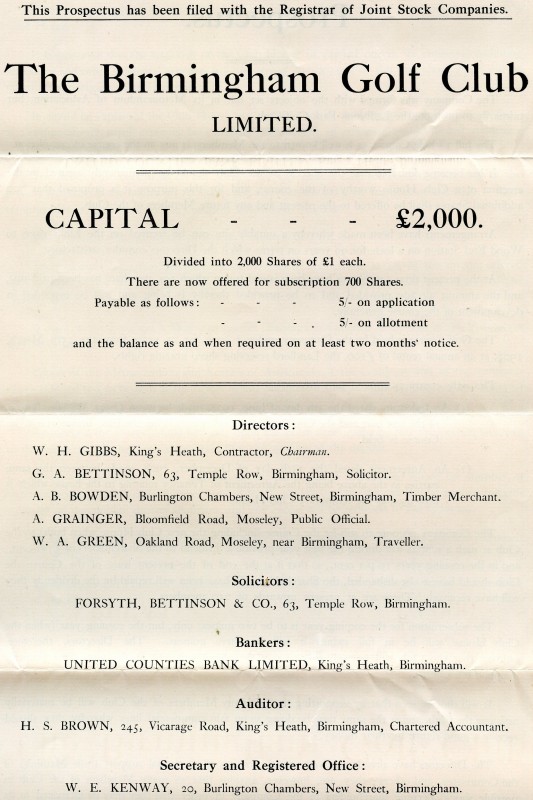 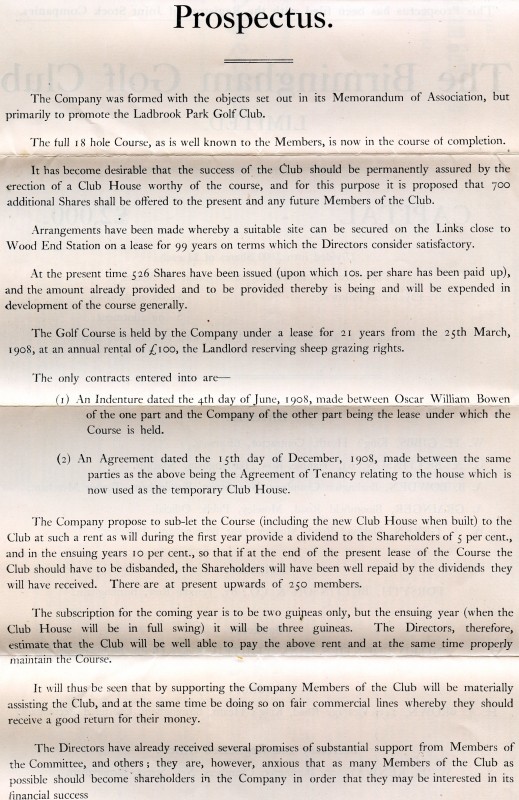 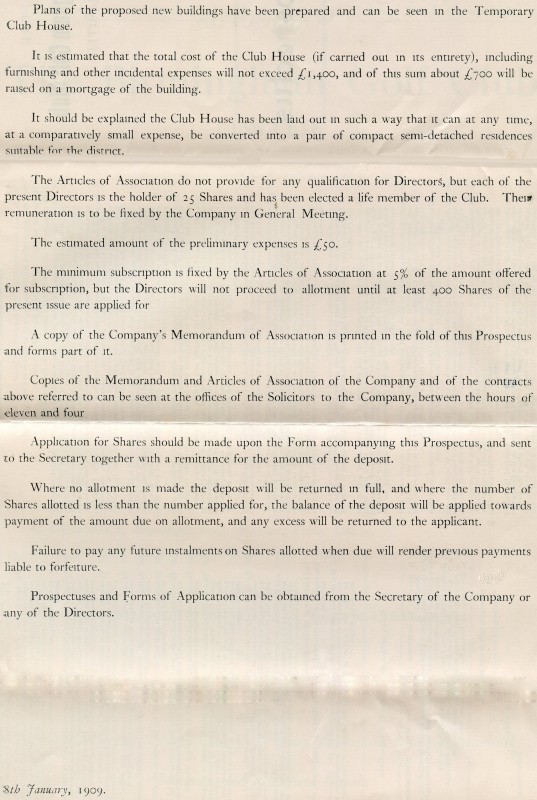 Oscar Bowen opened the new clubhouse. The ceremony was followed by lunch and a match between teams selected by the captain and the secretary, the latter’s team winning 15-12. After the match there was a supper – “a splendid spread” - at which toasts were given, followed by a smoking concert. The Stratford-Upon-Avon Herald reported that “proceedings were most enjoyable and successful”. 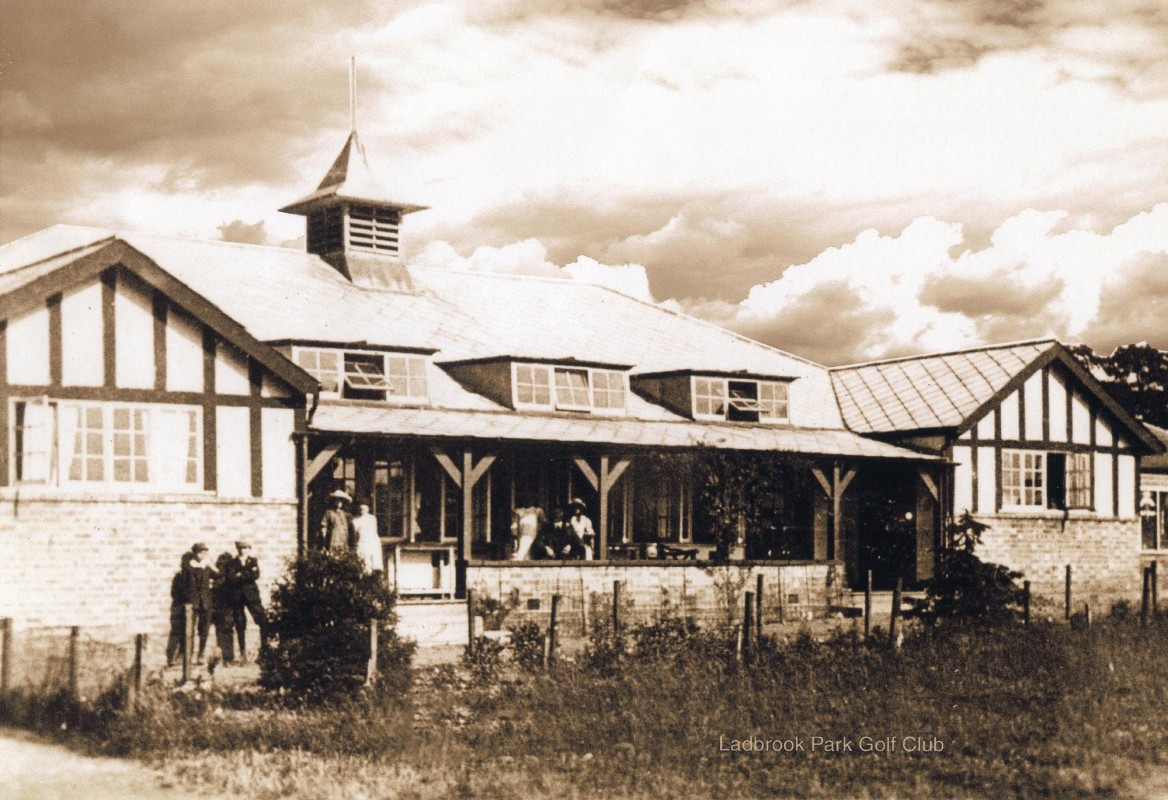 Apart from the turning around on the 3rd, 4th and 5th holes, the layaout has only had minor modifications over the years. 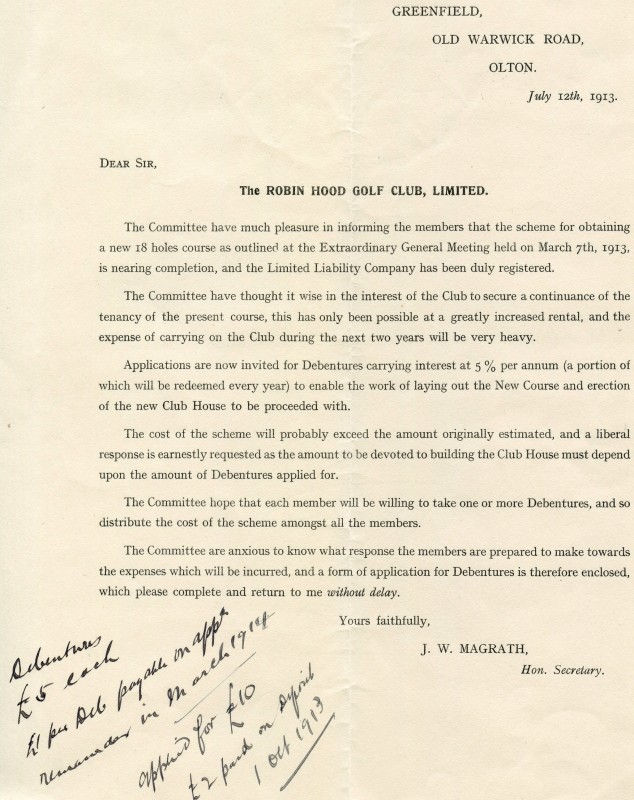 Robin Hood Golf Club remained on its original site until it moved to the course vacated by Olton Golf Club in St Bernards Road. This remains the club’s course today 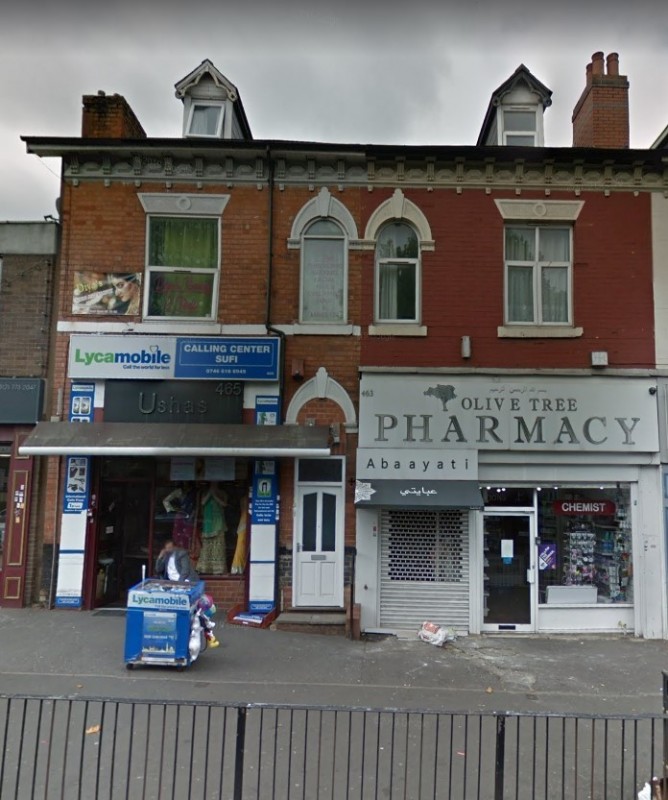